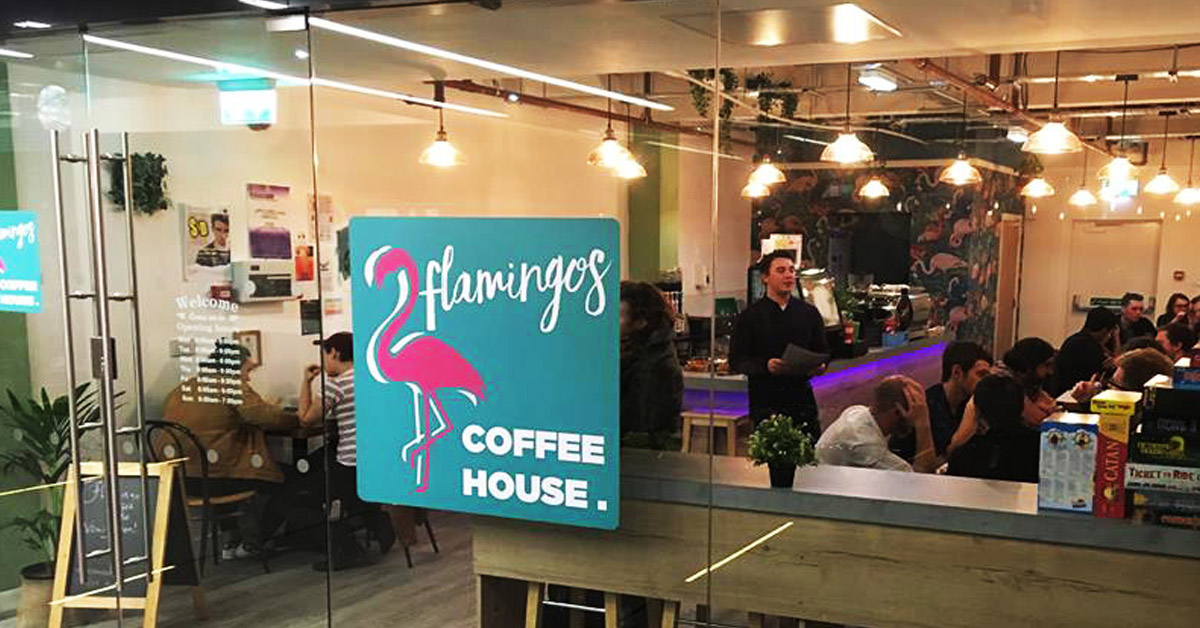 Alongside pineapples and Salvador Dali, the flamingo is one of nature’s greatest achievements when it comes to expressing flamboyance and ridiculousness.

That combination of elegant head and ludicrous beak; the penchant for standing on one leg; their insistence on eating only food that makes their feathers pink… they are Eurovision, Pride and Divine rolled into one; swans sexed-up by the surgeon’s scalpel.

So when you find yourself strutting down Lower Briggate and pass a guy holding a flamingo-emblazoned sign on a stick, you damn well follow that sign.

Much like its feathered namesake, Flamingos Cafe is a bird to behold. Situated at the Corn Exchange end of Central Arcade, it’s small but spacious, simply decorated but not lazily so, bright but not garish… in fact, if you’re after somewhere for a pit stop recharge, a lunchtime business meeting or even a quiet corner in which to write an impromptu review, this thought provoking little fish tank ticks all boxes.

In order to give such a joint a quick but fair appraisal, one must order one food item and one drink. I opted for a straight black coffee (tall Americano, long short brown or whatever you book-smart baristas want to call it) as this to me is the truest test of both the coffee itself and the ability of staff to make it well. OK, people tell me the real test is espresso, but I find the addition of water really separates the flavour groups, much akin to adding a splash of water to a dram of whiskey.

Supplied by local legends North Star - an absolute must have for Leeds coffee houses - the flavour is as good as you’d expect. OK, I’m a far cry from being called a master taster, but I drink a shit-ton of black coffee and could instantly taste that Flamingos know their beans. Edging towards the nutty end of the Arabica flavour spectrum, there’s a touch more than a hint of dark chocolate present and a tiny splash of berry that’s tart but not bitter.

So, loud and clear, the liquid is A-OK! How about the solid?

Not being overly hungry, I opted for a miscellaneous veg-filled pastry the name of which I declined to take note; there was some curry coloured mashings and various peas, and overall it was a very decent snack. Fuck Greggs sausage rolls, vegan or otherwise.

As reviews for cafes go, you could probably at this point change the venue’s name to that of a place you already frequent and never really have to bother visiting Flamingo. But that overlooks one small detail about the world’s most fabulous fowl:

Hailing itself as “Leeds’ only dry, late night LGBT+ friendly Coffee House” they manage to move left of field and become something a little more than the usual coffee shop.

A relatively large section of wall space in the place is dedicated to advertising a plethora of predominantly local and clearly conscientiously chosen charities, mostly LGBT, but also agencies who help other marginalised subsections of our species. This tells us Flamingos cares about us and our safety, whoever we are.

Near the window sits the stack of board games now de rigueur for any chic modern hangout. This tells us Flamingos wants us to stay awhile and have fun.

Most importantly, six days a week it’s open until 9pm. This tells us Flamingos is ahead of the curve.

Having lately made a steep and steady climb from very regular and rather heavy drinker to non-drinker, I’ve long lamented the lack of booze-free places where an adult can hang out on an evening. Berlin has them, New York has them, Bangkok has them, Santiago has them… any great city acclaimed for its bustling, vibrant night scene has at least some late or all night dry spots. This for me is a string England’s longbow is sadly lacking.

How many more years must we suffer the ‘booze Britain’ stigma before someone realises that if Britons will insist on spending evenings socialising en masse, perhaps its a good idea to provide venues that don’t sell alcohol alongside those that do?

Sitting in Flamingos, I had the rare warming feeling that things could yet change for the better.

Coffee shops of Leeds, this is what we need! Night culture minus binge culture. The choice to hangout somewhere late with friends and not have to face the bar tender’s glare when you ask if the coffee machine is still on at ten past nine.

As the ‘gay scene’ (call it what you will) has already done with cinema and clubbing it now appears ready to do with coffee, in Leeds at least; pushing boundaries… showing a new way by doing things their way, and long may this trend continue.

So when you finish work today, instead of heading down the local to sink a few jars of happy hour hooch, strut on down to Flamingos and join the growing flock; it’s warm inside and there are pink feathers.