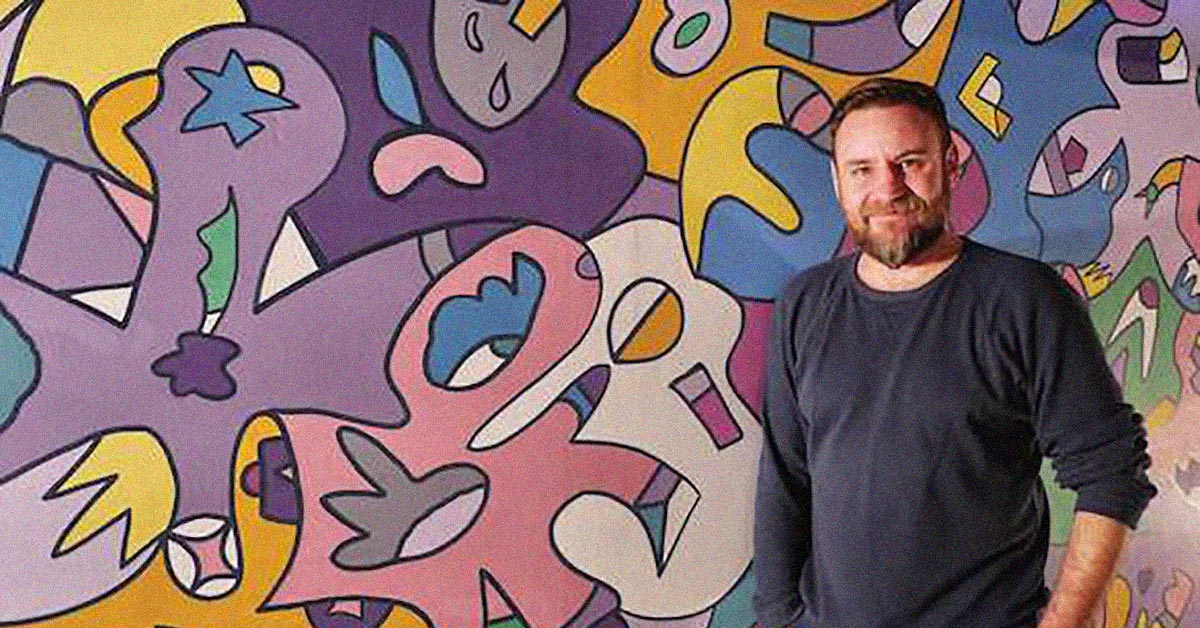 To attend one of Nicolas Dixon’s exhibitions is to step into a world of two very different perspectives. This comes as no surprise from a man who stepped into the multifaceted world of visual art fairly late in life, having previously lived as a DJ in Thailand, found love, moved to Germany, lost love, returned to Leeds…

His is the work of someone who has lived lives other than that of a career artist, as the kaleidoscopic results so beautifully demonstrate.

Following exhibitions around the UK and in New York – a city whose inhabitants must feel particular kinship with the visual cacophony in Nicolas’ art – several high profile commissions in Ibiza saw Dixon move out to the White Island in early 2013.

One of these commissions was a mural spanning the full length of the lobby wall at Urban Spaces(1), Ibiza’s first boutique art hotel. This caught the eye of people behind infamous nightclub and global institution, Pacha who invited Nicolas to reinterpret their iconic logo in homage to the club’s 40th year.

To cap off this successful summer, Nicolas had the honour of collaborating with a number of internationally renowned artist for the ‘Sons of Warhol’ exhibition held by Urban Spaces. A little more than five minutes of fame, as I’m sure even Warhol would agree. Quite the successful summer in fact and Nicolas returned to the UK an artist in high demand.

In September, he was commissioned to create a 10 meter long mural for Leeds nightclub, The Garage – host to the world’s longest running club night, Back to Basics. Another large scale mural followed, this time at The Rainbow in Birmingham.

Now, Nicolas is hitting the road to tour the UK with ‘Labyrinth’, his first solo exhibition tour since returning from Ibiza last autumn. Anchoring the context around a couple of older pieces, Nicolas presents an exciting array of new pieces to bring you deeper into his spirited sphere of polarising perspectives.

Choosing to hold the opening night in his hometown of Leeds, Dixon kick start the tour at Outlaws Yacht Club on New York Street, before heading North East to the newly opened House of Blah Blah gallery in Middlesbrough. The next exhibition(2) opens tonight at Major Tom’s in Harrogate (7.30pm opening) before heading to London next year for a major show, the location of which is currently top secret!

The artist describes the new pieces in Labyrinth as “intricate, interconnecting roads of intrigue”

The artist describes these new pieces as “intricate, interconnecting roads of intrigue.” Within his maze of complex lines and biomorphic shapes, accentuated with splashes of vivid colour, Nicolas hopes you will find a man, who, like all of us, doesn’t always know which path to take.

Allowing his hand to take the reins of what Jungian psychological theory calls the ‘collective unconscious’, Nicolas creates pieces of art that, in contradiction to their initially apparent complexity, thrive on the simplicity behind it all. Our brains are hardwired to search for pattern in everything we witness. The uncertainty of the interconnecting desire lines that navigate the ocean of Dixon’s boldly coloured shapes and patterns allow the viewer’s mind to extract meaning from the abstraction; the pattern-seeking brain attaching one’s own personal familiarity to what at first seems chaotic and unfamiliar.

The overall effect mesmerises, especially when first witnessed up close, immersed in the puzzle. Take several steps back and a different pattern emerges. Take several more, then again, and things become gradually simpler, easier to comprehend; a succinct and calming vista to consider at those moments when life presents you a forked pathway.